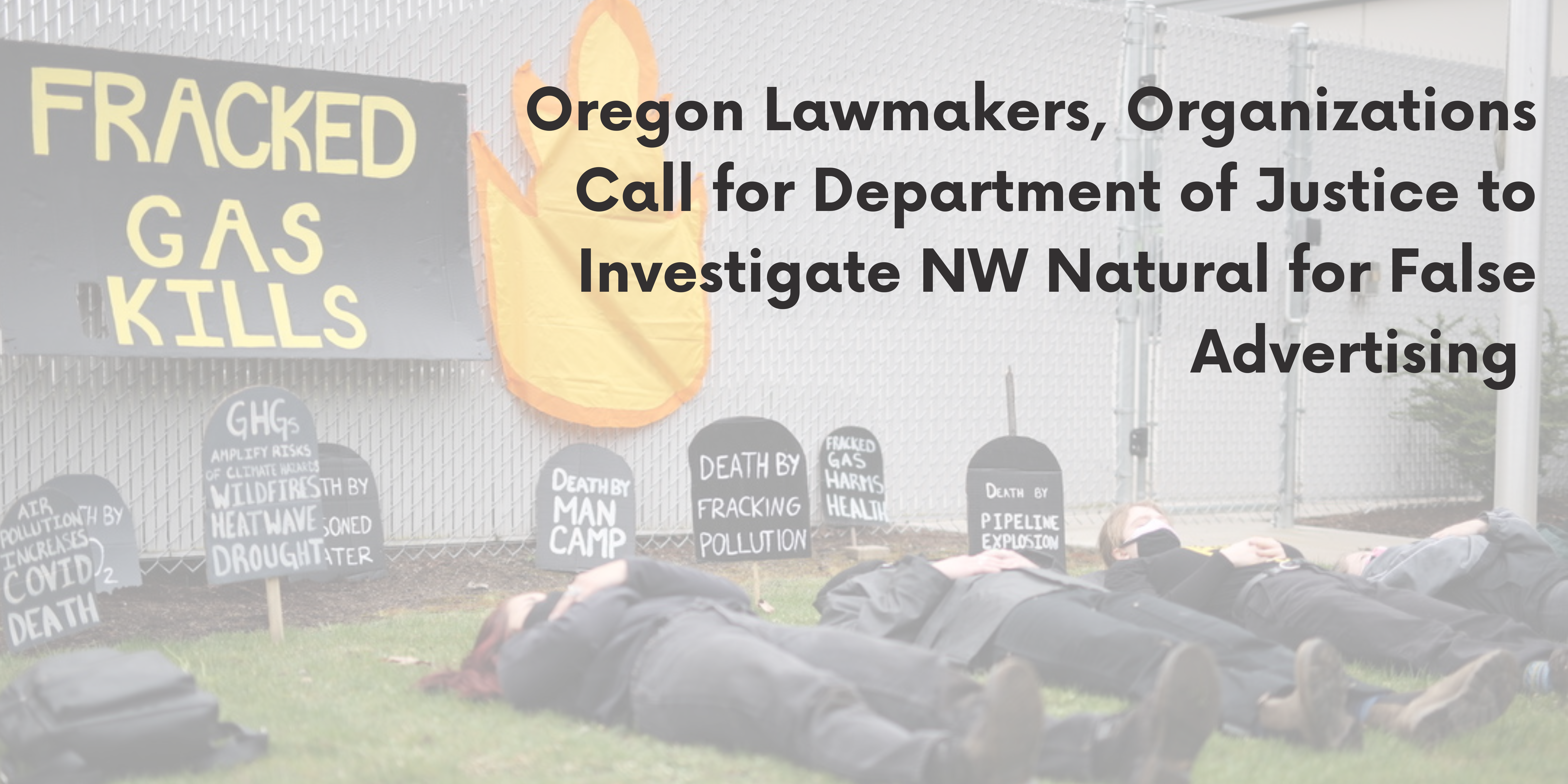 Eugene, Ore. — Six Oregon elected officials and more than 30 organizations submitted a petition calling on the Oregon Department of Justice to investigate the state’s largest methane gas utility, NW Natural, for deceptive advertising practices, including falsely promoting gas as a climate-friendly solution, misleading the public regarding the company’s energy investments, and seeking to influence school children to think positively about methane gas.

The petition – which was submitted to Attorney General Ellen Rosenblum today – comes as elected officials across Oregon consider strategies to transition homes away from methane gas in an effort to cut dangerous air pollution and slow climate change. In response to the growing threat of regulation, advocates say NW Natural has launched an escalating propaganda campaign aimed at delaying the transition to clean energy in homes by misleading consumers, elected officials, and Oregonians at large about the climate and health risks from methane gas appliances.

“NW Natural is using the tobacco industry’s playbook to promote its dangerous product and avoid regulation,” said Eugene city councilor Matt Keating. “It is time that the state holds this polluting fossil fuel corporation accountable for the demonstrably false and misleading statements that it is sending to its ratepayers, the general public and elected officials.”

In their petition calling for an investigation, elected officials and organizations point to NW Natural advertisements and communications that seek to mislead Oregon residents about the availability of “biogas” – a form of methane sourced from factory farms and landfills that NW Natural has falsely claimed can decarbonize buildings. In advertisements, NW Natural describes the fuel as “on its way home,” even though NW Natural does not deliver any biogas to Oregon homes or businesses. All of the biogas paid for by Oregon customers – including a project NW Natural told customers would provide enough biogas to “heat 18,000 homes we serve in Oregon” – is piped to out-of-state gas customers.

“Anyone concerned about climate change or corporate accountability should be alarmed by NW Natural’s false promises to supply so-called ‘renewable natural gas’ to Oregonians,” said Nora Apter, climate program director for the Oregon Environmental Council. “Not only has it yet to deliver any RNG to Oregon, but NW Natural is asking customers to foot the bill for costly investments in this risky, nascent product. Which, by the way, is still primarily methane, and emits as much CO2 and other harmful pollutants when burned in homes.”

“In the midst of this current climate emergency, Oregon needs to be quickly advancing an equitable transition off of fossil fuels to clean, renewable energy and healthy homes. Unfortunately, NW Natural is spreading false solutions and rate increases which will enrich its shareholders at the expense of our most vulnerable,” said Oregon State Representative Khanh Pham (D-Portland). “Oregon should not allow the fossil fuel industry to continue to mislead regulators, ratepayers, and the general public any longer.”

In addition to communications around biogas, the petition also cites NW Natural’s efforts to distribute fossil fuel workbooks to schools that encourage children to associate methane gas with baking cookies, eating pizza, and cartoon characters. This propaganda effort – which was paid for by Oregon gas customers – has become a flashpoint in a rate case surrounding the utility’s request to increase Oregonians’ gas bills by 12%. In a separate request to regulators, NW Natural is also seeking to raise gas bills 16% for the winter heating season. If all of NW Natural’s rate increases are approved, customers across Oregon could see a cumulative rate increase of 42% over a 12 month period.

“For over 15 years NW Natural has publicly claimed to be working to address climate change while doing everything it can to prevent regulation, delay a just transition off of fossil fuels, and confuse the public about the health impacts of fracked gas use,” said Bethany Cotton, conservation director for Cascadia Wildlands. “Using ratepayer dollars to distribute propaganda to school kids is an unconscionable new low in their corporate misinformation efforts.”

Many of NW Natural’s most egregious instances of false and misleading advertising and communications surround a local effort from the city of Eugene to phase out gas in new homes and buildings. In light of the NW Natural’s explicit efforts to obstruct local climate policies, the petition calls for the Department of Justice to open an investigation into the utility’s false advertising and communications — a key step to protecting the public.

“As local organizations and advocates in Eugene call for common sense policies to protect our public health and climate, NW Natural is using its effectively unlimited resources to mislead the public and elected officials about the significant harm of its product on our community,” said Aya Cockram, coalition coordinator for the Fossil Free Eugene campaign. “It is untenable for a publicly regulated, multi-million dollar corporation to be allowed to spread misinformation to avoid accountability and their responsibility to the people they are meant to serve.”